This image offers a good perspective of Goat Island’s location between the American & Canadian Falls. Accessible only from Niagara Falls New York. It’s the oldest State Park in the U.S.A. 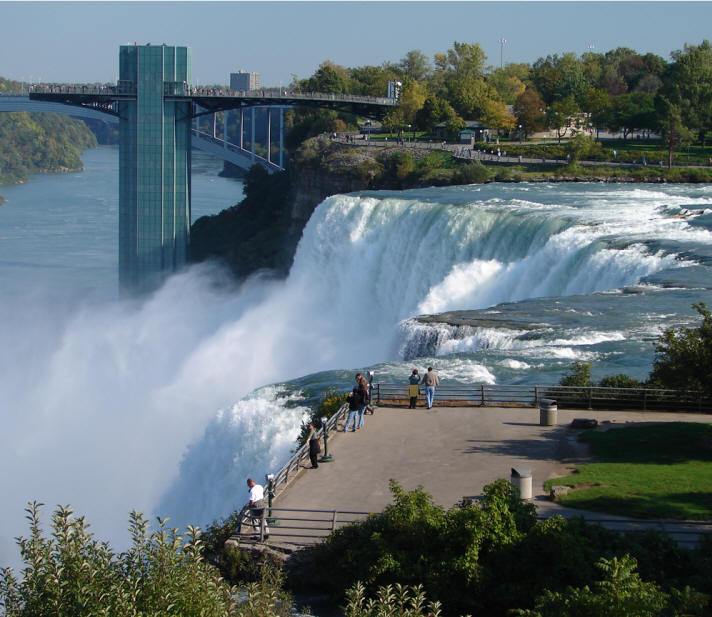 On the far side of the American Falls is Prospect Point Park and the NY State Observation Tower. A small foot bridge crosses the rapids close to the brink of the Bridal Veil Falls leading to Luna Island. 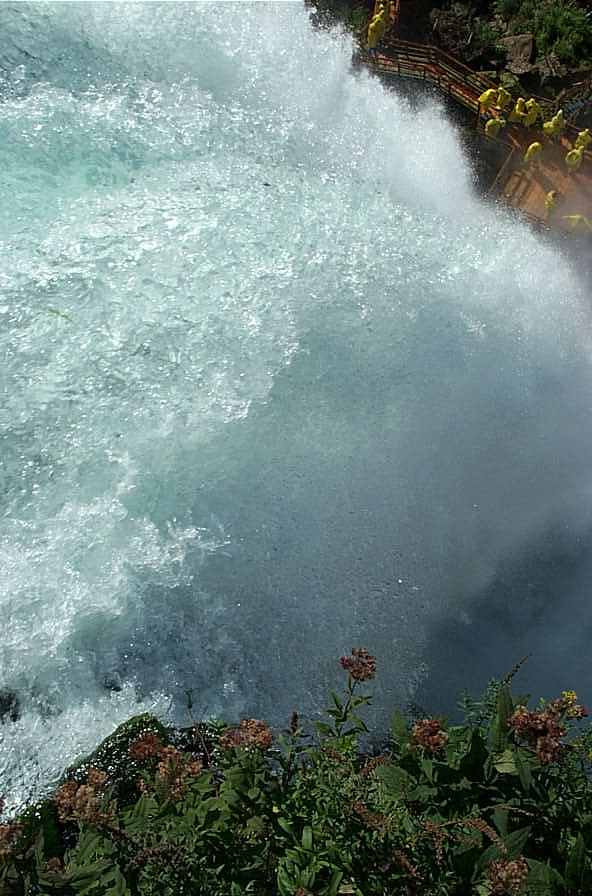 Leaning over the edge of the Bridal Veil Falls reveals the Cave of the Winds attraction below. 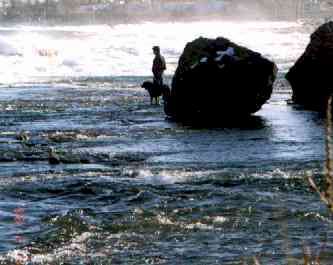 Three Sisters Islands accessed from Goat Island offers a great view of the Upper Rapids before cascading over the Canadian Horseshoe Falls. 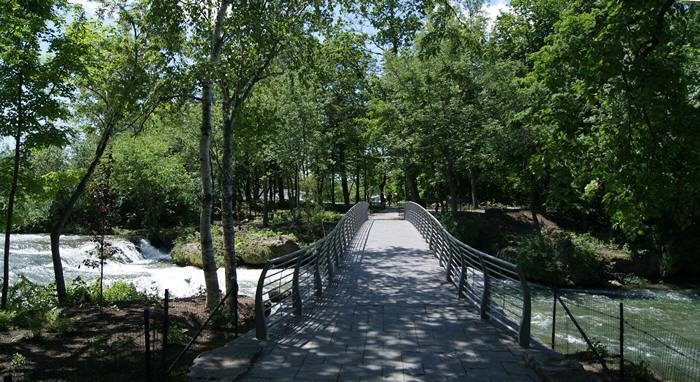 Foot bridge from Goat Island to the Three Sisters Islands.

In 1879, botanist Frederick Law Olmsted, wrote that he had traveled four thousand miles throughout the continent “without finding elsewhere the same quality of forest beauty which was once abundant about the falls, and which is still to be observed in those parts of Goat Island where the original growth of trees and shrubs had not been disturbed…” Olmsted concluded that the spray from the Falls created a natural nursery for indigenous plant life.

John Stedman – an early pioneer and miller – kept a herd of goats on the island. The animals all died in the terrible winter of 1780, but gave the island its name.

The preservation of the island as parkland is due to the early efforts of Augustus Porter, who in the middle 19th century recognized the long-term value of the falls as a tourist attraction. Porter purchased the island and later allowed a group of Tuscarora Native Americans to live on the island and sell their crafts to the tourists who came to the falls by stagecoach and early railroads. In spite of pressure, Porter refused to tame the environment on the island. In 1817, he built a toll bridge to the island for tourists. It was swept away by ice, so another was built the following year downstream. Basil Hall called it “one of the most singular pieces of engineering in the world”. Almost seven hundred feet long, it soon became the best-traveled walkway in the region.

In 1885 the island was included in the Niagara Falls State Park which is the oldest state park in the U.S.A.

There are no fees to visit Goat Island but there is a fee to park your vehicle and to visit the Cave of the Winds. If you would like to avoid a parking fee please park on nearby Buffalo Avenue and it is only a five minute walk to the Island. You can also access the park on foot via the pedestrian bridge located several hundred feet before the brink of the American Falls. No trip to Niagara Falls is complete without a visit to Goat Island.
The channel of the Niagara River splits in two above the falls, creating two sets of falls, one on either side of the island. In 1959-60, the eastern side of the island was extended about 8.5 acres (34,000 m²) for additional parking and a helicopter pad. Fill was provided from excavation for the construction of the Robert Moses State Parkway. The waters immediately around Goat Island are relatively shallow and studded with islets and rocks, many of them scenes of dramatic rescues and rescue attempts.

Visit the Cave of the Winds. During the months of May through October. 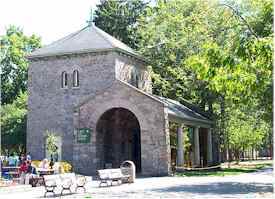 « The entrance is on your left ! 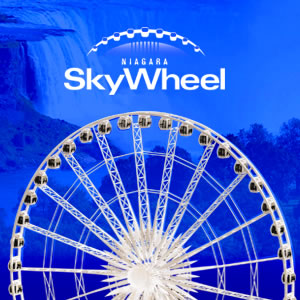